A seasonal yo-yo saw a warm March give way to an even warmer early April, with one day the temperature reaching 25C. This meant the vines stirred from their winter slumbers early in March, creating a very early bud-burst. The buds were therefore well advanced when they were struck by an extreme air frost over several nights around 26/27 April 2017. In SE England temperatures of -6C and even -7C were recorded. Air frosts tend to be far more damaging to plants than the ground frosts we normally experience.

In Albourne Estate in West Sussex, Alison Nightingale was up at 2am on 3 consecutive nights to light around 1000 large candles (each around the size of a 10 litre paint tin) or “Bougies” as they are known, to keep the air temperature above freezing. Then just before dawn she and her team went around extinguishing them to save the precious candles for another night!   This practice is used throughout Europe to reduce the impact of frosts.

Alison has a 26 acre vineyard (just over 10 hectares) and said “Having nurtured and cared for every one of my 41,000 vines since planting, I am compelled to do something to help them through the frosty nights even if it means no sleep!” The 2017 frost across SE England was the worst recorded for 20 years. 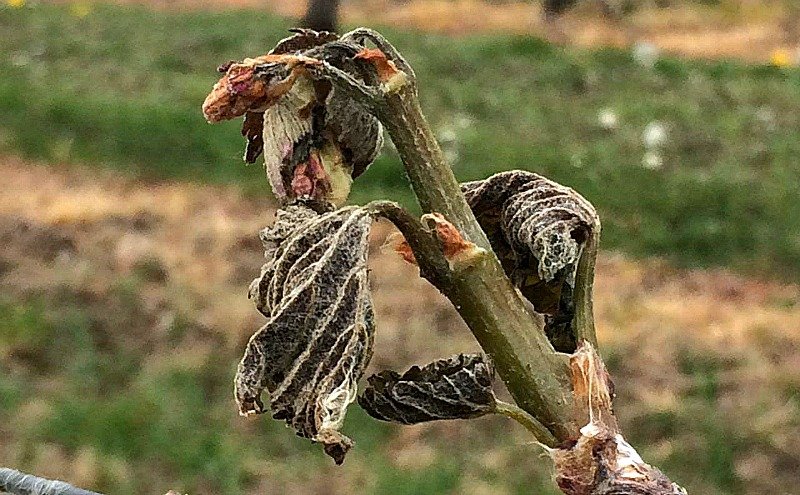 Some vineyards saw the first growth shoots wiped out and had to rely on the second buds, which are not quite as fruitful and are always up against time to ripen (particularly in the marginal growing area of England).

We are concentrating on SE England as this is where over 54% of the English area under vine is located. The SW of England fared slightly better in terms of early frosts.

The weather improved in May and June with little rain and lots of sunny days, with perfect flowering conditions in mid/late June. After the ups and downs of the first half of the year the rest of the season, July, August and September were devoid of any really long settled sunny spells and it was either raining or there were heavy winds. This meant the growers had to pay constant attention to the canopy to avoid diseases. After an early flowering period in Mid June, veraison [the change of colour of grapes, which marks the beginning of the ripening process] was also early in most vineyards and was through by mid-August. Early varieties started being harvested in September and by mid October most harvests were complete . Normally the English grape harvest finishes around early November.

In terms of yields, several vineyards in SE England, like Bolney in W Sussex reported 50% volume reduction but high quality.   Larger producers like Chapel Down, who (in addition to their own vineyards) work with several contract growers across Kent, Sussex and Essex, managed to mitigate the frost impact by the dispersion of their vineyard sites.

By comparison to England, Spain is a vast wine-growing country, with many, quite different wine areas. Nevertheless, the overall nature of the 2017 vintage is remarkably similar to that in England.

Notably, the same severe frost that struck England from 25 – 27 April 2017 also hit much of Northern Spain and had the same devastating effect on the vines. If this wasn’t enough to depress winemakers, there was a heat wave over much of Spain throughout July and August and very little rainfall.

This affected everyone, including those growers in the centre and South of Spain who escaped the frost, but the overall result throughout Spain was a much earlier harvest than usual, with a much lower yield than normal.

Rioja is accustomed to significant seasonal variations, albeit it has a range of sub-climates is its three distinct areas of Rioja Alta and Rioja Alavesa (cooler, more Atlantic climate) and Rioja Baja. (warmer and more Mediterranean climate).

2017 was indeed challenging. Rainfall had been low over the Winter and early Spring warmth accelerated the bud burst. A severe frost struck most of the higher parts of Rioja Alta and Alavesa on 28 April, causing many vineyards to lose almost all of their first buds and in some cases the vines did not recover for the 2017 crop. The summer was very hot and dry but August saw welcome rains and then good weather over the harvest period which commenced earlier than usual in September. Overall, yields are down in Rioja by 20%, but quality is excellent.

Frost is not uncommon in this area, due to its altitude and absence of surrounding mountains like Rioja around 100 miles to the North East. In fact this area normally only gets around 140 frost free days a year, but 2017 brought particularly extreme frosts notably on the night of 27 April where the temperature fell below 0C for over seven hours dipping to -6C.

The growing year was also exceptionally dry, receiving around 55% of the normal rainfall. After the growing season and an earlier than normal harvest, the picture is similar to other Northern areas but yields were severely hit and the overall figures from Ribera indicate yields around 50% less than in 2016. However, the quality is excellent.

Toro escaped the frost, by not the heatwave, although the initial assessment of its vintage quality is “unbeatable” . Similarly, yields are down by 30%.

Luckiest of all was Rias Baixas , (in Galicia in the far North West) where, because of the influence of its maritime climate and the Gulf Stream, it never has frosts.; the dry summer was a pleasant change from the normal damp, misty, disease-inducing weather. The resulting harvest yield was excellent in both quality and quantity.

In the South – the important regions of Castille – La Mancha, Alicante, Jumilla and Jerez – quality will be high but quantity will be down by about 15% overall, but fortunately the 2016 vintage was large and mostly of good quality which could provide a buffer against rising prices.

However, in the North, in particular in all the regions mentioned, yield is significantly down and this will effect prices as there is demand for these wines. Most wineries will try to minimise price hikes, but with devaluation of the pound and fairly stable prices in Spain for the last few years, expect around 5 – 10% price rise.

2017 will be remembered as a particularly challenging year, across most of Western Europe, with much lower yields, but one which produced excellent quality. The English 2017 vintages are now in stock; albeit Albourne Estate Bacchus is in very short supply, Alison had sold out a month after release!

From Spain we are thrilled with the 2017 vintages of the brilliant value, organic wines from Dominio de Punctum, in particular Lagasca Viognier 2017 and Domino de Punctum Rosado 2017.

Overall, we are optimistic that we can continue to find interesting wines at reasonable prices from Spain, which still offers, in our opinion, excellent quality and value. Closer to home, we also continue to be impressed by the quality of both Still and Sparkling wines from England, as we review current prices of comparable wines from Sancerre and Champagne. Drink less; Drink Better!