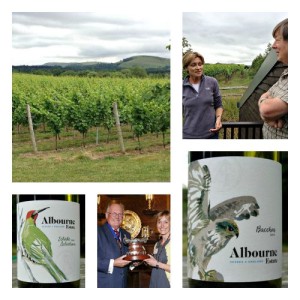 English Wine Week runs from 28 May to 5 June 2016.  It is a great time to discover more about English wine which is rapidly growing in popularity. Most of the wine is produced in the South East, in particular in Sussex, Hampshire and Kent. Over 450 vineyards are making around 3.15 million bottles a year, some of which are exported for wine-drinkers worldwide – even in France!

In celebration of English Wine Week and to raise funds for Tuppenny Barn in Southbourne,  we have organised a “Meet the Producers” Wine Tasting on 3 June 2016. This promises to be a fun, informative evening with two experienced speakers who both have a great story to tell about how they realised their vision for growing vines and producing fine English wines.

Alison Nightingale, co-owner and winemaker at Albourne Estate, West Sussex hit the news when Albourne Estate Bacchus 2014 won the UK Wine of the Year Trophy in 2015. This was an amazing achievement as it was up against 320 other English Sparkling and Still wines, and it was only Alison’s second vintage.

Albourne Estate has just under 30 acres in gently rolling hills near Hassocks, in West Sussex. In the early 2000s Alison decided that she wanted to spend more time with her young family. She left her high-flying job and moved with her husband to Sussex. She was always interested in wine and wanted to find a career that would fit around her family. She completed a degree in Viticulture and Oenology at Plumpton College in 2007 and after much searching in Hampshire, Devon and Sussex she found a suitable local site for a vineyard in 2009.

The vines were planted in 2010 and her first still wines were released in 2014. Albourne Estate Sparkling wines, which take longer to make and mature, will be on sale in 2017.

The second speaker is Paul Langham from a’Becketts Estate in Littleton Panell, Wiltshire, just North of Salisbury Plain. Like Alison, he decided to leave the corporate world and one Saturday, drinking a glass of wine he said to his wife “we must be able to do this” and that is how their adventure started. Paul and his wife Lynn established the vineyards and orchards in 2001. Now that the vines have achieved a degree of maturity, Paul has realised his dream of producing his first red wine from Pinot Noir, in addition to a range of Still and Sparkling white and pink wines. Paul and Lynn farm 21 acres in all, with 12 acres under vine. Paul was Chair of the UK Vineyards Association 2013-15 and is an accomplished speaker.

Tuppenny Barn on the A259 between Southbourne and Emsworth, is an eco-build, large circular multi-purpose area on an organic small-holding which is run as a social enterprise. It is a focal point for a number of community and educational activities. Their ethos is to educate about natural food production. Proceeds from this event will go to fund-raising for a number of projects to help it become an increasingly important community facility.